U Brakes are a type of rim brake with pivots mounted to the frame or fork. In connection with this article, please read the lead article about rim brakes. It covers, among other things,

Most brake problems result from excessive friction or poor installation of the cables, not poor setup, or poor quality brakes. Also see the article on cables for information on cable selection and adjustment of brake cables and brake levers. 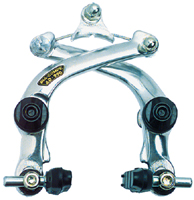 A U brake is a brake that works like a centerpull caliper, only with the pivots mounted directly to the frame or fork. The "L"-shaped arms cross over above the tire, so the left brake shoe is operated by the right side of the transverse cable. A U brake uses studs (bosses) attached to the front fork or frame above the rim, rather than below it, as with conventional cantilevers. U brakes use the same type and placement of studs as rolle-rcam brakes do.

In 1986-88 there was a fad for equipping mountain bikes with U brakes mounted underneath the chainstays. This provided a nice clean look to the seatstay area of the bicycle, and provided a somewhat simpler cable routing. In addition, as the chainstays are larger and more rigid than typical seatstays, the "problem" of flexing of the studs under load was reduced. Conventional cantilever brakes cannot be mounted on the chainstays, because they would get in the way of the cranks.

Although U brakes were cool-looking and powerful, the fad died quite abruptly when people actually started using the bikes that were sold with chainstay-mounted U brakes. They had several serious drawbacks:

In recent years U brakes have been making a bit of a comeback on freestyle bikes.

First, remove the arms from the studs, and make sure the studs are free of rust. Coat the studs liberally with grease (this is VERY important!)

Install the arms with them at their maximum spread and tighten the bolts that hold them to the frame. This is how you set the springs. Only connect the transverse cable after this has been done.

A U brake uses a conventional brake lever, not the special lever with longer cable pull used with direct-pull brakes (V brakes). Set the transverse cable as short as possible for best braking, and adjust the cable and lever. (See the article about cables). There is usually a small setscrew on the side of one of the arms for fine adjustment of spring balance. Adjust the brake shoes. (See information on brake shoes in the lead article on rim brakes.)

Check the brake shoe adjustment frequently due to the decrease in mechanical advantage as the brake shoes wear, and their migrating higher and higher up on the rims. If you don't keep on top of the adjustment, they will eventually start rubbing on the tire sidewall. Many thousands of tires have been ruined by this.